It was about a month into my first semester of college. So we're talking a fair ways back. The night of October 3rd, specifically. I was approached by the rather-silly Charley Goddard at a little after 2:00 in the morning: "Greg, you seem like the kind of man who would be interested in eating things at silly hours. Might I interest you in a 5-5-5?" Goddard could not have been more correct; 2 AM was the prime time for some eating.

I asked for a little more detail, unfamiliar to the whole 5-5-5 concept. I had never ordered pizza on my own before. Apparently, Dominos is open into the wee hours of the morning, and they have this sweet deal where you can order three medium pizzas for $5 apiece. Pretty sweet deal. I asked if I could get toppings on my $5 pizza; Goddard said of course.

What he said: I would get a $5 pizza, and if I wanted to, I could buy toppings for it.

What I heard: I would pay $5, and receive a pizza with however many toppings I wanted.

To me, this didn't sound like much of a question at all. If I'm paying a flat fee of $5, I may as well get my money's worth and order as many toppings as I possibly can, right? So I navigated over to the Dominos website and started planning.

After a significant amount of thought, here was the pizza that I had planned:

This was going to be the ideal pizza. It was like two meals in one. Like, I could have a 2 AM pizza dinner, and also I could have a 2AM meat-and-other-fix-ins feast, and also I could do both of those things at the same time. What could possibly go wrong?
Goddard placed the order: three medium pizzas. The first pizza would have light sausage. The second would have no sauce; just dough and cheese. The third would have sausage, steak, ham, feta cheese, Parmesan, provolone, garlic, mushrooms, pineapple, onions, peppers, and diced tomatoes.
My $5 pizza cost $16.
As in, my pizza alone cost more than a typical 5-5-5.
Turns out, they charge for toppings.
The guy actually called us back a minute later to make sure that we were sure we ordered what we wanted. Apparently, it's a little funny to order a pizza without sauce. My pizza was totally fine and normal; one of the others just seemed a little quirky.
Time passed; the pizzas arrived. I could finally taste the glory that was twelve different toppings. $16 totally well spent. 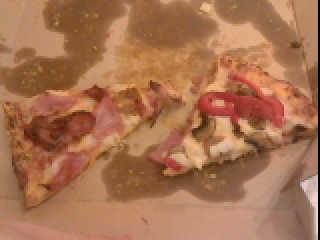 I sold two of the slices to friends at $2 apiece to make myself feel better about wasting $16. Overall, delicious, but not worth $16.
Maybe if they didn't forget the pineapple it would have been better.
Posted by Greg at 1:40 PM