I have a learner's permit. I got it in March, but I never get around to driving, and I don't have time for driver's ed, so I'm nowhere near getting my license. I've driven a total of six times or so, and can't get back on the road until I get a new permit (it went missing in Pittsburgh last month). I'm about as good a driver as you might think. Which is to say, an EXCELLENT driver.

Before continuing, I should briefly mention that I have clip-on sunglasses that I wear while driving. And I wear them every time. Just in case. You know. Priorities.
So the first few times I drove, I was exclusively confined to parking lots. Not lame small ones, but interesting school parking lots with turns and things. But then one day, I was given the fantastic offer by my dad to drive around my neighborhood. (I only ever drive with my dad, because my mom says she doesn't think her heart can handle being driven around by me.) I of course eagerly took him up on this offer.
So here's how my neighborhood looks:
Those are all roads. So basically, there are a lot of cul-de-sacs. It's a terrible place for having friends who live near me or for being able to walk to a store to get food in a short amount of time, but it's a fantastic place for being as smooth a driver as I am.
So I was driving on the middle cul-de-sac, when I encountered quite the terrifying foe: a rival car. It was unoccupied, but when you encounter a sleeping bear, do you just say, "Well, that's a nice bear, but I'm not afraid"? Hint: no you don't. You said "OH LORD THAT IS A BEAR. I'd better move carefully lest I get EATEN ALIVE." Except that the caps would wake the bear up, and you would get eaten alive, because you are very foolish and not good at avoiding bear attacks. Point proven? I think so.
So there I was, sitting behind the wheel, moving upwards of ten miles an hour faced with one of the most menacing beasts I've seen in my life. I knew I had to act fast, lest I run into it and awaken its fury. So here's what I did: I drew out my battle plan in my head. I didn't even tell my dad what I was going to do; in high-pressure situations, you don't have time for democracy. Sometimes you've gotta take control. I planned to go AROUND the car, staying on the road, and just keep on driving; then, when it was passed, go back onto the main road. 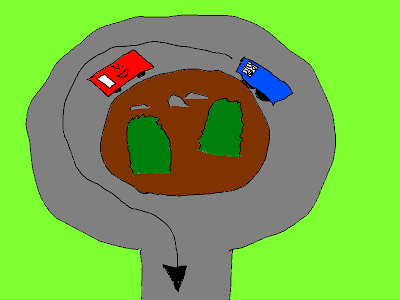 Sure enough, it worked. I was quite proud of myself. As I exited back onto the road, I triumphantly announced, "Aww yeah. Did you see that slick maneuver? That's why the call me Slick Maneuvers Edelston." My dad lovingly responded, "Greg, keep your eyes on the road." 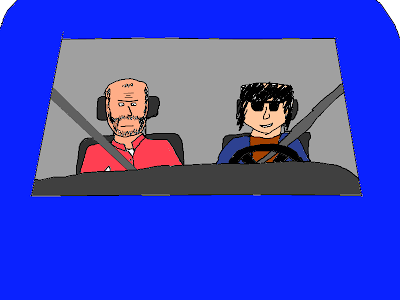