So I've just created a blog. I'm a bit against the first post being all GUYS THIS IS A FIRST POST WHAT UUUUP C': so I'll try to be a bit more substantial than that by providing a rough explanation for this blog. Basically, I come up with forty ideas a minute for Facebook stati. However, many of these have to be rejected, for myriad reasons. Some are too long, and after trying to condense them into the 420-character limit, I either give up, or give a disgustingly abridged recount that cannot possibly say what I want it to say. Other stati cannot really be put into the third person that easily; I'm one of those sticklers who keeps his stati in the third person like the olden days of "Greg Edelston is ____," and if I want to start my post with a possessive, then I'll either have to post "Greg Edelston 's _____" or "Greg Edelston My ____," or abandon the status altogether. I often go with the latter. Other stati still have to be disregarded altogether because I just had one ten seconds ago and what if people think I'm on Facebook every time I'm home (which would be an accurate conclusion) or what if they don't get to see my previous status because it's not at the top of my profile and the old one was so much better than this and so how can I possibly disown that old one etc.; thus, I lose the new idea.

I combated this problem by creating a Twitter. Well, sort of. I created my Twitter because I didn't really know anything about it and figured it would probably become the big thing some day. My reasoning behind this was that I was initially resistant to Facebook, which I now see as one of the most useful things we have available to us. I then proceeded to use Twitter for getting amusing updates from amusing people who amuse me. It serves me well as a pretty good source of the chuckles. Nowadays, though, I also use it as an extra outlet for status ideas. The deciding factors of which one I use for which idea are as follows:


Granted, my Twitter posts get sent to Facebook anyway, so everyone can still see and comment on it anyway. Besides that, I have a whopping 22 followers, so it's not like I get more people to see what I post on Twitter than on Facebook or anything. I can only think of two real differences. The first is that Twitter is in third person, whereas Facebook is in first; the second is that a post just feels different from a status. It just does.
But I digress. The point was that I often have too many status ideas, and still some have to be rejected from both Facebook and Twitter. Thus, I'm creating this blog, entitled Mildly Upsetting. This is sort of my "musings," if you will; however, I do not want this to be like all of the whiny tween blogs wherein people post about their feelings. If you read this blog, you should know when I'm happy (hint, it's upwards of 98% of the time), but you should not know when I'm upset. You just don't want to read that. You'll probably just hear my anecdotes about my day or my ideas that I had or my thoughts on a subject. I haven't been chuckling to myself while writing this post in particular, for the obvious reason that it's just straight-up not funny. The objective of this post is to explain, about which I feel bad, because anyone who is reading this will feel as though s/he has wasted his/her time. Thus, I provide you with a graph relevant to two of my activities today: 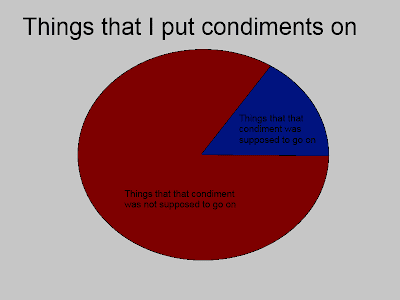