So today I had a calc test. The lights in the room were broken. Rather, the lights in the entire building were broken, and the room happened to be in the aforementioned building. There are backup lights in each room, so it wasn't pitch black or anything, but it was considerably dimmer than we were accustomed to. It was like the just-a-little-darker-than-the-ideal-time-of-dusk-but-really-only-a-hair-darker kind of dim. So in the portion of the class leading up to the test, we were getting by just fine; but once the test began, there were a few complaints about the darkness.

Now, before going on, I should mention that I wear a jacket on roughly 95% of days. Even when it's not particularly cold, I find it useful to wear a jacket. (Summer is the exception.) The reason for this is that I need to store things, and I need to be able to access them. The answer? Pockets.

My favorite jacket is a blue one with two pockets in the regular pocket spot just above the hip, with sort of "secret pockets" on the inside. There's also a fifth pocket up on my left ribcage. It's a little like this: 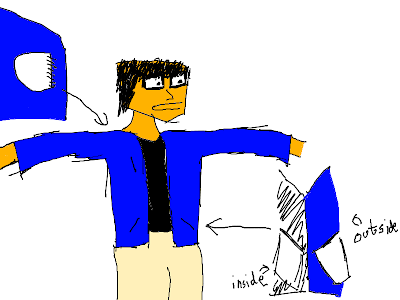 I've been known to store things in my pockets. Like a lot of things. Like a LOT of things. Currently, among my goodies are my clip-on sunglasses, four Post-Its from a charity walk, three wooden pencils, one fountain pen, two Bic pens, one Pilot G2 07 pen, two mechanical pencils, one Zebra retractable pen, a headlamp, a bag of Cheerios, and a pair of 3D glasses from Megamind (excellent movie, by the way). And that's far less than I normally have, by the way. (The pen count is abnormally high and the random-sillies is abnormally low; I've been known to carry things like staples, empty plastic bags, the New Testament (I'm Jewish), various Gameboys, and more.) For this reason, I refer to these pockets as my Utility Pockets.

So back to calculus. The test began, and people began complaining about the darkness. I reached into my Utility Pockets, produced from nowhere the aforementioned headlamp, and put it on my head.
I had the headlamp in my pocket from a camping trip I went on a month and a half ago - I never got around to taking it out. Better still is the fact that I wasn't even the only one to perform this feat - a friend of mine in fact pulled a headlamp out from his own backpack from a camping trip that he had been on not too long ago.

So basically, manliest calc test ever. nbd
Posted by Greg at 12:08 AM